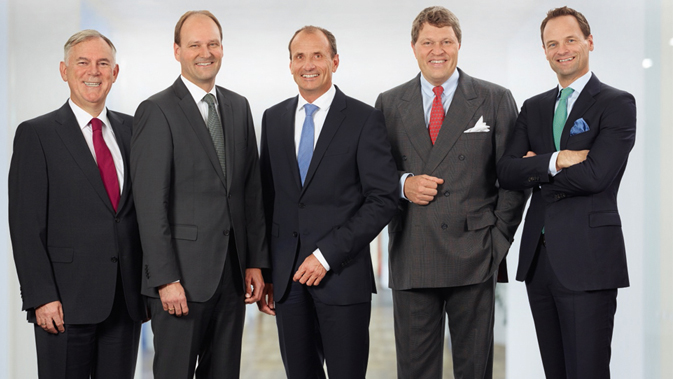 The family-owned company Miele is pleased to report historic all-time highs for both sales and employment levels: The world's leading manufacturer of premium domestic appliances achieved a turnover of € 3.49 bn in the 2014/15 business year which ended on June 30. This represents € 267 m, or 8.3%, more than in the previous year. Around the world, Miele employs a workforce of 17,741. During the period under review, investments totaled € 150 m.

The level of impetus, which is clearly much more dynamic than in the previous year, is a reflection above all of the worldwide market success of new ranges of built-in appliances and laundry-care products as well as an improved vacuum cleaner line-up. Furthermore, the world economy has started to pick up at a higher rate than political and economic trouble spots such as Russia and the Ukraine, the Middle East and Greece at first indicated. But, nevertheless, trade in key markets was rendered more difficult on account of increasingly fierce competition. On the other hand, sales were given a helping hand by worldwide exchange rates, although sales still grew by 6.4% even after factoring in exchange-rate effects. “Taking all this into consideration, we can be highly satisfied with the past business year,” summarizes Olaf Bartsch Olaf Bartsch, Executive Director with the Miele Group responsible for Finances and Administration.

On the German home market, Miele recorded sales of € 1.03 bn, up year-on-year by 5.4%. Outside Germany, sales grew by 10.1%, whereby above all the US, Australia, Great Britain, Switzerland and Hong Kong are worthy of notable mention. Despite inclement framework conditions, business in Russia, too, made good progress, as well as the countries in southern Europe hardest hit by the debt crises, Greece included. In total, sales outside Germany grew by one percentage point to 70.4%.

For the current fiscal year, management at Miele anticipates further growth in terms of both turnover and unit sales. 'With our products and marketing concepts, we are perfectly positioned to expand our market position, even in the face of more severe competition', confirms Dr. Markus Miele, Executive Director and Co-Proprietor of the family-owned company first founded in 1899. To what extent this actually transpires depends on how economic framework conditions develop, considering for example the current economic slow-down in China, the new element of uncertainty.

Then again, experience shows that strong brands have a special attraction for consumers, particularly in economically testing times. “Like no other brand in our branch of industry, Miele stands for dependability and the stability of values,” claims Executive Director and Co-Proprietor Dr. Reinhard Zinkann. This is borne out by the results of well-respected benchmarking projects such as GfK's 'Best Brands' study in which Miele was again acclaimed 'Best corporate brand' during the reporting period across all branches of industry. Only a few months previously, Miele was awarded the '2014 German Sustainability Prize', one of the most coveted distinctions of its kind in Europe.

Innovation instead of price wars
The company's high repute in the trade and among consumers is the result of a long-term corporate strategy based on a sense of responsibility. This includes an uncompromising focus on quality – succinctly expressed in the 'Forever Better' brand promise – but also in the consistent premium positioning of its products and an unerring focus on Miele as the one and only brand in the company's portfolio.

Miele gives the strategy of using second and trade brands to secure market shares, a phenomenon increasingly observed in the market landscape, a clear thumbs-down: “The Miele logo has pride of place on all the appliances which leave our factory gates, and where Miele is on the label, Miele is inside, too,” says Dr. Axel Kniehl, Executive Director responsible for Marketing and Sales. Instead of becoming embroiled in price wars and discounting, which only can only be detrimental to the brand, Miele chooses to place its trust in innovation and in offering improved value for money through higher-end features. This is flanked by marketing concepts which offer great user benefits, for instance by combining the purchase of a washing machine with a supply of detergents.

As always, Miele continues to test its products such as washing machines, tumble dryers, dishwashers, ovens and vacuum cleaners to last 20 years, thereby setting itself clearly apart from the competition in terms of reliability and product life expectancy. The list of incumbent winners with Stiftung Warentest, Germany's leading consumer watchdog, was increased and confirmed during the period under review through the addition of test wins in the fields of hob units, dishwashers and washing machines. For their exemplary product design, nine products from Miele won a 'red dot' or an iF award.

Miele sets standards with newly launched products
Miele's claim to technology and innovation leadership in its branch was further substantiated during the financial year just ended through new product launches. At the LivingKitchen trade show in Cologne, Miele's new Range proved to be a crowd puller. This series offering with countless varieties and top Miele quality is currently responsible for significant jumps in turnover in North America.

During the financial year under review, the 50-millionth Miele vacuum cleaner left the assembly lines at the Miele Bielefeld production plant – and floor care models from Miele were test winners in six important European markets, including Great Britain, France and the Netherlands.

Miele Professional records € 449 m in sales
In view of their ruggedness, washing machines from Miele – in a modified form – have always risen to meet the higher requirements of commercial users. In this sense, the Miele Professional business unit was created 90 years ago. This division now contributes € 449 m to overall turnover and, despite a decline in the willingness on the part of potential customers to invest, grew during the past business year by 6.4%. Clear growth was achieved for example by a new generation of high-performance flatwork ironers. The same also applies to a new range of particularly hygienic commercial dishwashers aimed at optimizing consumption and cycle times as well as washer-disinfectors for reprocessing medical devices and laboratory equipment. Attractive promotional models to mark 90 years of laundry technology at Miele have already been well accepted by the market. In view of higher requirements regarding machine commissioning and maintenance, after-sales service is all the more important to commercial customers. In this respect, Miele grew turnover with around 1000 own-brand service technicians by around 10%.

Further expansion of worldwide sales and service structures
As per June 30, 2015, Miele employed a staff of 17,741 worldwide. This corresponds year-on-year to an additional 81 employees or growth of 0.5%. Miele now employs 10,346 members of staff in Germany (down 0.6%). This minor drop was the result of the fact that vacated posts were not refilled. Outside Germany, sales and service operations were expanded in particular at subsidiaries demonstrating strong growth in order to reflect market developments.

At the Miele Group's German locations there are currently 419 young people enrolled in one of 33 commercial or technical apprenticeship courses. With the next new intake for vocational training commencing on September 1, the figure is set to grow to 500. Of these, around 130, or more than one in four, will embark on one of eleven dual degree courses which represent a combination of job training and apprenticeship on the one hand and a Bachelor's Degree in subjects such as mechanical engineering, electrical engineering, business economics or industrial engineering on the other. Under the auspices of the Master@Miele program, the company also provides diverse support and supervision to post-graduates studying for a Master's Degree.

During the past business year, the Miele Group invested to the tune of € 150 m. This is only € 38 m, or 20%, less than in the previous year. Such fluctuation is a natural reflection of the development cycle for new products, including the cost of overhauling and installing new production plant and equipment. During the period under review, the focus of investments was on the general refurbishment of production facilities, the ongoing expansion of sales and logistics infrastructure at Miele's Gütersloh site as well as on new showrooms in metropolises around the world such as Brisbane, Chicago, Beijing and Turin.

With 11 showrooms available nationwide to explore the product assortment, including the US headquarters in Princeton, NJ, Miele is one of the most desirable brands in household and professional appliances.

Call us or send us an email if you have questions or requests. We will be happy to help you.